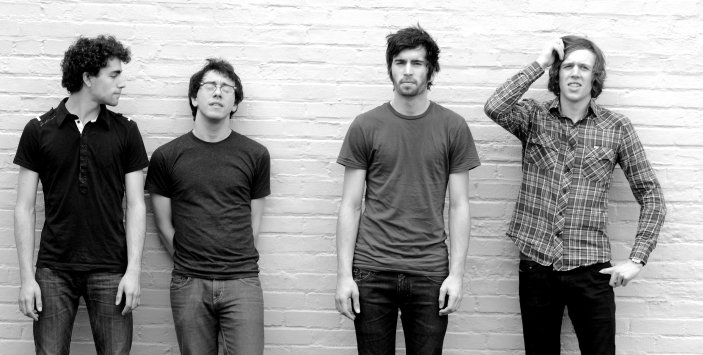 Hailing from the Canadian town of Ontario come the foursome, Tokyo Police Club, an unsuspecting group of lads whose raucous, fast paced tunes have compelled the world to prick up its ears in earnest attention and has now seen TPC travel the globe, fresh out of high school.

Without a hint of arrogance or air of superciliousness the quartet that make up this early twenty- something group are nothing short of charming. Following on from their overwhelmingly well received EP ‘A Lesson in Crime’, TPC has released their long awaited debut album, ‘Elephant Shell’. “We wanted to be eye catching, plus the name ‘elephant Shell’ isn’t in everyone’s vocabulary so there are no prior connotations”, says lead singer David Monks about the quirky title of TPC’s album.

In a game where so many young bands are trying to rake in the big bucks and explode onto the music circuit in two point five seconds flat, it’s endearing and refreshing to meet grounded and somewhat idiosyncratic band members. Waltzing into the intimate surroundings of Ding Dong Lounge in the city of Melbourne, with its retro silver curtain as a stage back drop, comfy couches and high stools, I witnessed this laid back group in motion. David Monks was practicing on stage with drummer Greg Alsop, whilst guitarist Josh Hook played an old school arcade game as the last member, Graham Wright bopped along to the sound check.

Without a grand plan of world domination in sight, Tokyo Police Club simply shifted into a higher gear following graduation. “We were just in High School writing songs and it came up to graduating and we were like, ‘OK whatever, this can be like our summer project and it’s built from there’.” It’s almost hard to believe that this is the chart topping band that scored accolades from MTV, reached No. 1 on the US Billboards chart and were hailed by the holy grail of music, Rolling Stone who stated, “If only all young guitar bands were smart enough to rock out this fast.” And boy, do they know how to rock it. Not ones to keep their tunes lingering on the stereo, each TPC song is roughly 2 minutes in length. However, their rock laden, pop- driven catchy beats and eccentric lyrics are able to resonate comfortably in your head, long after you press the stop button.

With super- charged tracks like ‘Tessellate’, ‘Your English Is Good’, ‘Cheer It On’ and ‘Nature Of The Experiment’, the latter two from their EP, it’s no wonder TPC have been touring the globe non- stop. Having already played at some of the world’s most iconic music festivals including the Pop Montreal Festival, Coachella, Lollapalooza and Raskilde in Denmark, Tokyo Police Club now have Splendour In The Grass in Byron Bay to contend with. Melbourne was the first city on their visit to Australia, and according to the boys, it has been the most surreal to date – mainly due to the time difference. “We didn’t even get Sunday – we lost a whole day! You know, when you’re a rock star days don’t even apply to you”, quips Greg with a smile.

Up at Splendour in The Grass they’ll be met by mates from other bands like the Cold War Kids, with whom they have toured once before in America. As well as an entourage of exceptionally fine acts from around the world, plus hot local groups like Wolfmother, Pnau, The Presets, Gyroscope and Little Red to name oh but a few.

TPC are keen to see The Grates and Icelandic outfit Sigur Ros perform, in addition to Brisbane group Yves Klein Blue, who is supporting Tokyo Police Club on their Aussie tour.

Like most young guys, the Tokyo Police Club foursome still find time throughout their grueling tour schedule to curb boredom and play a bit of hacky- sack, which according to Greg is their “golden ray of sunshine”, or watch the latest Batman flick. Eyes lit up around the couch as soon as I mentioned The Dark Knight, as we closed off the remainder of the interview discussing comic book villains and why the Joker is a way cooler a part to play than Batman.

Young in years yet mature in their attitude and raw alternative sounds, the Tokyo Police Club surely do depict a band without prior connotations. There is no implication that they are your generic indie rock band, apart from their shaggy hair, tight jeans and converse sneakers. There is a personality and tongue- in- cheek humor coursing beneath that elephant hide from which Tokyo Police Club have emerged and their future will undoubtedly hold even more acclaim, with a legion of fans eager to witness their exuberant and vivacious live shows and unconventional film clips.

Speeding through the music industry with authority and quite possibly batons and handcuffs, the Tokyo Police Club will continue to arrest listeners with their steely tunes and hand- clapping, which has almost become as signature a sound on a TPC record, as David Monk’s distinctive vocals.