It needs to exist as common knowledge that LA hardcore punk rockers, The Bronx, are hands down one of the best live performances you will ever see. That may seem like an overtly zealous and sweepingly biased statement, but I’ve been to enough gigs in my thirteen years as a music journalist to make such a declaration.

This was the fourth Bronx gig I’d had the pleasure of witnessing, and it was clear that something had altered in the air over the past two years since the band had last graced Aussie shores. People were onto them. The die-hards were still there, stalking the stage like creatures possessed, however a new breed of ravenous fans had caught wind of this 5 piece band, and wanted to sink their teeth into their fast paced, heady guitar and ferocious drum laden sounds, devouring every morsel of hardcore punk , piece by bloody piece. The new hordes have arrived by way of The Bronx’s latest eponymous album, IV. This apt title is a nod towards the album being the fourth from the band, keeping in line with all preceding album titles. Only this time, the launch of their new album saw the band sell out shows around the nation, including two at the famed Corner Hotel in Melbourne, the scene of many sweat-soaked and frenetic Bronx gigs in the past.

As the throngs gathered at this eminent location, the legendary artist, Rhys Cooper was again selling his prized limited edition signed Bronx gig prints – an extremely worthy possession, if you can secure its safe passage through a fist hammering, full assault Bronx gig.

Infamous front man, the infectious and captivating Matt Caughthran, is a force to be reckoned with on, and off, the stage. He always delivers an insatiable performance, prowling the stage menacingly, scoping out the crowd, the smell of anticipation and exhilaration penetrating his nostrils. The flock had come to drink at his fountain, and he was ready to overfill their golden goblets. Like ‘caged animals’ released from their Groovin’ the Moo shackles,The Bronx were ready to unleash.

Opening with the first track from their lastest album, The Unholy Hand, the crowd were on cue, thrashing and slamming into one another, arms flailing and crowd surfers mutating from the mosh pit swarm. A few metres behind, arms were punching the air and calves were already screaming in pain from jumping up and down for pure delight at this no holds barred band, that give their absolute everything, every time. If Caughthran is the life blood of the band, then the heart beat has to be drummer Jorma Vik, who pounds on his instrument with an intensity that permeates your rib cage and spills through to your lungs, causing your breath to quicken. Brad, Joby and Ken (bass, guitar and guitar respectively), are the arteries of the Bronx anatomy, a fine specimen that albeit wild and  unpredictable, works in harmony with it’s parts to produce something musically  astounding.

And speaking of unpredictable, half way through the set, Caughthran decided to walk through the crowd (as is his somewhat fearless nature) and sing Knifeman from a pillar ledge, aided by the constituency that boosted him up onto the make-do stage. This in turn caused a change in the tide of the crowd, as the moshers realised their beacon of light was now in the middle of the room, and the wave from the front swept it’s way through to Caughthran, forcing people that had stood idle thus far, to get in on the action and be saturated by the excitement and passion of this band, arms raised and heads nodding feverishly. 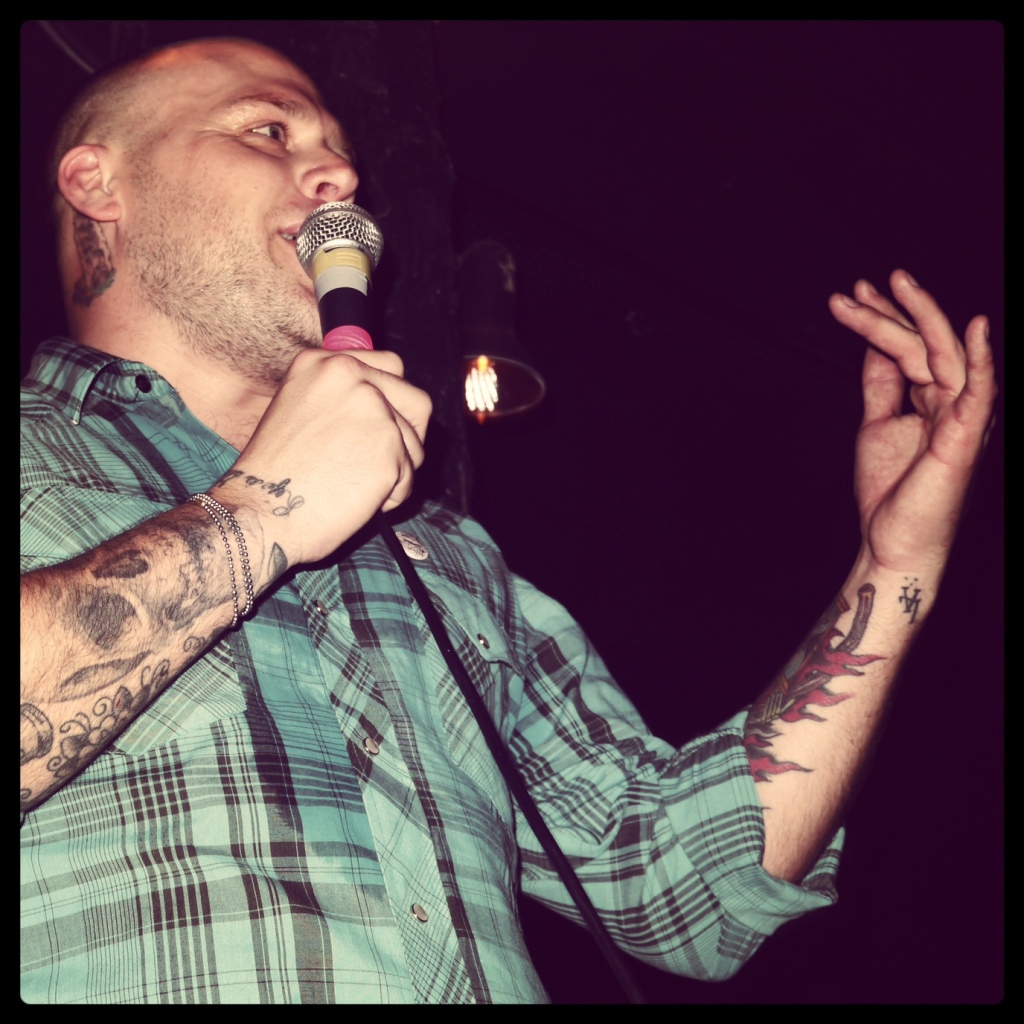 Also playing tracks from their popular new album, including Under The Rabbit, Youth Wasted, Too Many Devils and the rip-roaring Ribcage, the lads also played old favourites, They Will Kill Us Without Mercy, Shitty Future, History’s Stranglers and White Guilt.

Always the comedian and charmer, Caughthran and his Los Angeles brogue certainly knows how to tell a story and schmooze the fuck out of a crowd, be it with a rendition of Ozzy Osbourne’s inability to communicate coherently with his Black Sabbath crowd, or if a female punter has a lost shoe lobbed on stage from explicit crowd surfing, only being able to retrieve it with a kiss from Caughthran. The male punter that also lost a shoe wasn’t as fortunate.

Thank Christ for the Bronx, because as we left the venue, ears ringing and adrenaline pumping, it wasn’t the beer that had created the uniform buzz experienced. It was the delight of a top-notch live band that appreciated making music as much as they appreciated their fans.  And that, is what it’s all about.