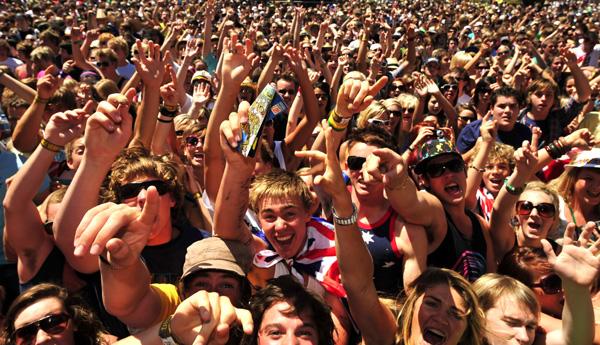 Patriotism means different things to different people in different countries. It can be viewed as the display of pride of one’s home land, or the innate need to want to protect its liberties and rituals. In Australia, we have one particular ritual that has survived a lengthy occupancy throughout our land. It is one custom that will continue to be protected, for as long as kick ass bands wish to tour our fair country. It is the Big Day Out, and it goes hand in hand with a flag wrapped around your torso and a Tooheys New can in your hand. Who needs the new Australian citizen survey when you can come to the Big Day Out and be indoctrinated into the music festival hall of fame?!

This is the one major Australian event that has graduated well beyond single digit figures in age, with almost two decades of unbelievable, jaw dropping and enviable performances notched into its well worn belt. Where else can you see Neil Young play alongside The Prodigy, or the Ting Tings alongside Bullet For My Valentine? Nowhere but in your indie-rock-punk-dance wet dreams. There were so many wicked artists on the bill this year that you didn’t just want to be in two places at once, you wanted to be in four, surely giving the characters from Heroes a run for their money…

Kicking off my festival day were Sydney quartet Sparkadia, whose debut album Postcards is a regular featured in my party shuffle rotation. Their melodic rock pop is as intriguing as it is entertaining. Keeping with the Aussie flavor was highly popular Melbourne band Little Red, whose noticeable mantra of variety aplenty is evident, with three different lead vocalists and an array of instruments to back up their 60s rock n roll revival. Australian rock icons The Living End powered through their set on the Blue Stage, as the crowd chanted the classic Prisoner of Society at the top of their lungs.

Visceral heavy punk rock nutters Mammal gave a live wire performance on the Essential Stage. The local pride continued to shine through as The Butterfly Effect played at the same time as UK indie rock magnates still pushing through puberty, The Arctic Monkeys. As cool as the Monkeys would be live, there was no way I was missing this Brisbane band. Their ability to send rock tunes rampaging through an audience is second to none, and they also showed they could calm it down with deep and articulate lyrics on songs like Gone. It was nothing short of captivating.

The international line-up for Big Day Out was, obviously, also phenomenal and tantamount to the same frenzied, giggle-worthy excitement an arsine prone kid would get watching a match being lit. Manchester duo The Ting Tings delivered an energetic set at the Green Stage, with That’s Not My Name wafting over the beer tent whilst all waiting in line for a beverage – along with the occasional line pusher-inner, you know who you are! – mouthed the words to themselves and did a little jig to pass the time.

Out of the merciless heat and into the shade of the, sometimes, not so aptly named Boiler Room came our salvation – Lupe Fiasco. This Chicago bred hip hop vanguard brought The Cool to the Big Day Out, but it didn’t last long. With a stellar array of crowd happy tunes such as Superstar and Daydreaming his electric performance had the audience eating out of the palm of his hand, and also sweating like the Boiler Room had intended. The happy vibe continued with our own Ajax helping punters to carve up the dancefloor with his electro house, as fellow DJ T-Rek produced the goods at the V Energy Hot Produce stage around the same time.

A massive name on the bill this year was System Of A Down front man Serj Tankian, whose reputation definitely preceded him. This guy, apparently, recorded an entire album upside down, and with his social activism, powerful vocal chords and even more powerful message he was a definite must see… If only see him rock out in a top hat. Following on from Serj was his mate and former Faith No More frontman Mike Patton. His group Fantomas includes members from Mr. Bungle and Melvins fame, and it was an interesting musical journey to say the least. The whole set was dedicated to the Fantomas album The Director’s Cut, which was played out in its entirety. It was no mean feat seeing that it is composed of covers from various horror films and cult movie scores.

If you didn’t get what Fantomas were attempting to convey, or if you didn’t care, then you could have gone to check out Neil Young. I didn’t, I went to witness The Prodigy blow the absolute roof off the Boiler Room! These guys are in need of no introduction, and I was keyed up by Keith Flint’s appearance – with his double mohawk – insane amount of energy and wayward tongue poking. Not one single person had their feet planted firmly on the ground, with iconic tunes like Firestarter, Breathe and Smack My Bitch Up rolling out during Howlett, Maxim and Flint’s incredible set. An awesome way to wind up another Australia Day in fine musical style!

Other worthy acts that merit a mention which I didn’t get to see – because, unfortunately, I’m not a superhero – were Hot Chip, the Dropkick Murphys, Cog, Bullet for My Valentine, Pendulum and My Morning Jacket. Until the flag flies again next year for this iconic music festival, may we all raise a hand to our hearts and chant solemnly, God Bless the Big Day Out!