Nostalgia in music is commonplace, yet when that sentiment is shared and celebrated by an entire sold out music venue’s audience, it exists no longer as a fanciful notion, but that sense of the joy, sadness, affinity and connection you felt is brought back to life immediately and becomes a part of your present journey. Such is the power of music, and such is the enduring appeal of Canadian songstress, Alanis Morissette.

As the perhaps unwitting poster-girl for 90’s alt-rock, sparking teenage girls (and boys) around the globe to hide their copies of ‘Jagged Little Pill’ and its Explicit Lyrics warning sticker from their parents, Morissette’s no bullshit attitude and intense, meaningful and unequivocal lyrics made her the heroine for many, including myself. It wasn’t necessarily an ‘angst’ that drew us to her (there was no misgiving supplied by her music), it was the honesty, experience and clever way that she delivered her message, with lyrics that were as memorable and deep-cutting, as they are relevant today. Lyrics that found their way with ease from the recesses of my teenage mind to my mid-thirties mouth, remembering the same way I used to belt those words out as Alanis Morissette played loudly from the CD player in my bedroom. Refreshingly unstaged, Morissette’s lyrical delivery has not changed, although her stage performance certainly has.

Having first seen her perform in Melbourne back in 1996 when I was just 13 years old, for the world tour of her debut international album ‘Jagged Little Pill’ (a record that sold over 33 million copies worldwide), 21-year-old Morissette was much ‘wilder’ on stage, pacing back and forth, speaking into the mic a little more vehemently, letting her long locks fall into her face as her oversized shirt hung loosely from constantly twisting wrists.

Fast forward 22 years, and a now 43-year-old wife and mother of two, Morissette’s set was acoustic (her vocals accompanied by two gentlemen on various guitars) and seated. Which personally, at 17 weeks pregnant, I absolutely loved! My fear of a watered-down version of what I had witnessed those two decades earlier evaporated as Morissette delivered her music with the same sentiment, authenticity, sassiness and reverence, but perhaps with a newly displayed maturity, calm and confidence, to shall I say, a well-watered but irrevocably adoring crowd. The sold out throng at the Palais Theatre in St Kilda was absolutely heaving and the crowd as raucous and wordy an audience I’ve witnessed in a while at an acoustic gig, where everything can be heard in between songs, including many mentions of, ‘I love you!’. The love for Alanis Morissette had not waned even the slightest inch.

As a veteran of live gigs, Morissette wasted no time giving the crowd exactly what they wanted. Entering the stage dressed all in black except for a striking yellow trench coat, that draped down her chair as she sat wide-legged, her signature long brown locks styled straight with blonder ends framing her face, she opened with ‘You Learn’, followed by ‘All I Really Want’, as the crowd sang each lyric back to her with gusto and applause. Delivering ‘Mary Jane’ with tenderness and a vocal display of her mezzo-soprano voice, she continued with ‘Hands Clean’, explaining that it was in fact inspired by a former colleague, not a former teacher as one fan had mistakenly interpreted.

‘Right Through You’ was an anthem for most of the ladies in the audience, followed up by a change of tempo with the gorgeous ‘Guardian’ written for Morissette’s son, Ever. Interestingly this song, along with ‘Everything’, ‘Heart of the Home’, ‘Precious Illusions’ and the finale’s ‘Thank You’ were the only tracks performed not taken from ‘Jagged Little Pill’.

Popular ‘Hand in my Pocket’ saw many iPhones produced from the audience as everyone tried to remember the lyrics to sing back to Morissette’s outstretched microphone. ‘Head Over Feet’ continued the audience chanting, as one particular heckler kept yelling out something imperceptible, and Morissette’s response was that when she can’t understand what someone is saying, she just makes it up. “Sure, I can chase Neil Young if I want. And you know what? I will!” Her divergence from these situations is flawless, as she continued after the several hundredth declaration of love, stating, “I love you more, although I don’t think everyone loves me, that’s for sure! My Dad gave me some advice, he said: ‘Some people will love you, some people will hate you, and some people won’t give a shit’.”

‘Ironic’ was given over to the crowd as the congregation savoured this iconic song, as well as enjoying Morissette altering the lyrics to, “it’s meeting the man of my dreams, and then meeting his beautiful husband”, mentioning it had in fact happened to her a few times.

The tempo then slowed for Morissette’s track from the 1998 movie City of Angels (starring Meg Ryan and Nichloas Cage), ‘Uninvited’, delivered as hauntingly well as I had imagined it would.

The last two songs to round out the set were from the absolute polar spheres of Morissette’s discography. Despite ‘You Oughta Know’ being delivered seated, this physical calmness belied the ferocity of the song, and of course that one particular lyric that could be heard echoing through the stalls of the Palais, much to everyone’s delight.

Finishing up on the fitting track ‘Thank You’, the crowd swayed in unison with many endeavouring to stand with arms raised, much to their dismay that this was to be a seated gig right to the end. Fortunately, as the final note was hit the crowd jumped to their feet to give appreciation for what was a thoroughly enjoyable set, not in the least bit indulgent on Morissette’s behalf, even opting out of the traditional and downright annoying encore facade so many artists revel in.

It may not have been the rock show I had witnessed as a teenager, but it was an evolution of both a beloved artist and her treasured songs, which once again were seeing the light of an accepting audience that appreciated them striped back and delivered with the same fervour and passion as they had been written over two decades earlier. 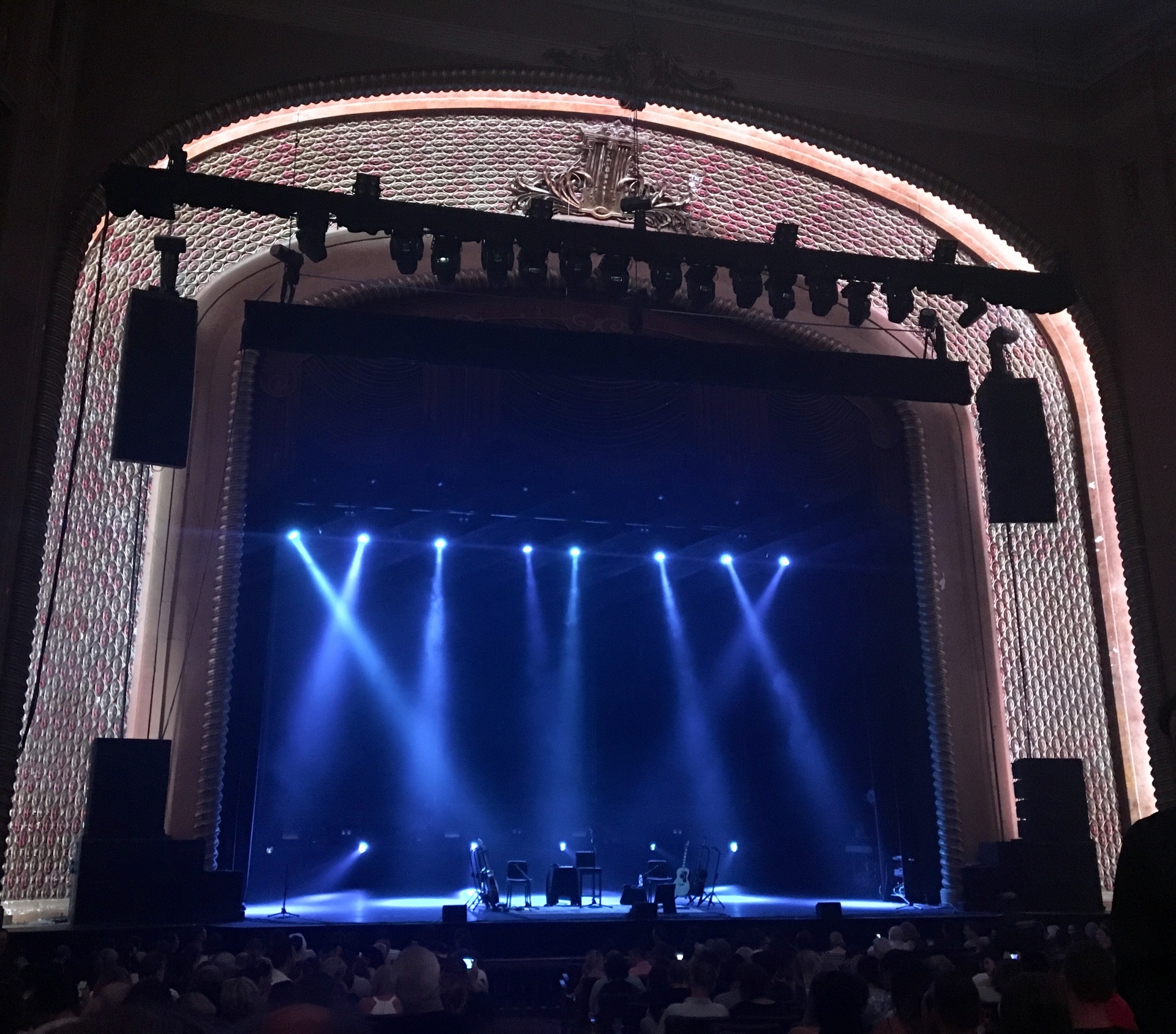