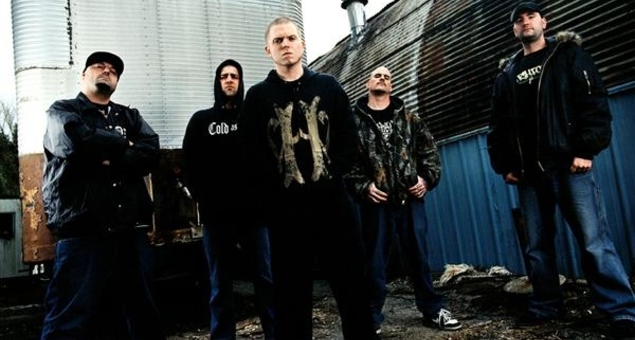 February the 29th comes along only once every four years, when the Gregorian Calendar decides it’s a perfect time to add an extra day to the end of the second month of the year. Many things are known to happen on this mystical day – women spring into action and propose brazenly to their perhaps not-so stalwart men; proper birthday parties happen for those unfortunate enough to be born on this day, yet lucky enough to pretend to be younger than they actually are; and, for this particular year, hard core punk heavies Hatebreed rolled into Melbourne.

As the rain drizzled down on Melbourne’s CBD, the black t-shirt brigade was out in force, donning band logos from Led Zeppelin and The Bronx, to Terror and Bad Religion. As a Sidewave show for the national Soundwave tour, this gig was undeniably MEGA. With not one, but three support acts – Cro-Mags, Biohazard and Raised Fist – it was an all in smorgasbord of heavy metal, punk and hard core. Swedish lads Raised Fist were without a doubt the real treat of the evening’s support acts, whetting our appetite and gearing up the swarming crowd. Having a support act that is this electric, energetic, well known in the hardcore circuit (forming back in 1993, a scarcely-believable two decades ago), and such a powerhouse live act, was amazing. Their set blew the roof of the cavernous Hi-Fi, as the shirtless Alexander ‘Alle’ Hagman belted out his half-growled, half-sung tracks, to the elation of the numerous nodding heads in attendance. Jumping around on stage, mastering some Jiu Jitsu-esque air kicks and tossing beer onto the mosh pit, Raised Fist even had the mob singing back to them in unison during Traitors and Haters.

With the stage now well and truly wet, trodden and steaming, it was Hatebreed’s cue to get on stage and continue keeping the noise fast, hard and very effing loud. The Connecticut natives powered on to massive applause, as the irony of Jamey Jasta’s vocals came at me with riveting force. Despite the ink, facial hair, piercings, three quarter pants, bandana and all that ‘hard as granite’ image stuff that is so stereotypically linked to this genre, Hatebreed’s songs are fundamentally positive. The method in which they are delivered gives the lyrics a pedestal from which to fly, reaching their audience only to be chanted back in unison. It’s extremely powerful, and as the stage lights throbbed and the five-piece thrashed their guitars, dominated the drums and rumbled out the words, I was wholly converted to the Church of Heavy.

The mosh pit was a sea of arms, elbows and crowd surfers being pulled violently from one side to the other, like some kind of musical exorcism. With tracks Destroy Everything (as the lyrics go, ‘Destroy everything, obliterate what makes us weak’), Hands Of A Dying Man (about Jasta’s late grandfather, who died of cancer), Everybody Bleeds Now, Burn The Lives and Doomsayer (the lyric ‘your doom awaits you’ is still pounding in my head) catapulted into the crowd. It is not hard to see how technically gifted Hatebreed is; There are so many change ups, thrashing metal riffs, double and triple drum kicks and a dirty, hammering and heavy beat compacted into tracks that are rarely over 3 and a half minutes in length.

Hatebreed work flawlessly as a well-oiled machine, engines firing and wheels screeching as they push hard on the pedal to give a gutsy and power-packed performance. Bestowing upon Melbourne the title of being ‘as hardcore as they come’ (a timely mention, prior to performing the track of the same name), it was obvious how much Hatebreed respected their Melbourne entourage, especially since it has been a while since they last toured. The band were frothing at the mouth not just to please them at this Hi Fi gig, but to continue riling them up for the anticipation of Soundwave to come. They definitely succeeded.